Release 6.8 of Trifacta® Wrangler Enterprise expands the formatting options for date columns and now factors in user-defined settings for locale.

When choosing a date format, the new drop-down menu simplifies navigation and search capabilities. Begin by entering the formatting string of your preference, and better suggestions are listed for you.

Locale settings also influence the suggestions presented to you by the predictive interaction service. Locale can be configured for all users in the workspace, and individual users can override these settings in their User Profile page. For example, a user in Europe may choose to override the default locale to select United States when working with a dataset sourced from the United States.

This release delivers improvements to the matching performance and logic of RapidTarget, which enables quick matching of your dataset to the target schema of your choice. RapidTarget can now auto-match based on the data in a column using fuzzy matching logic, in addition the column’s name.

The Create Table task allows you to specify the exact columns and their order to include in your dataset. In a single recipe step, you can list the columns in order that you want to include going forward. The remaining columns are dropped. This step works in a similar way to a SELECT statement in SQL to filter your data.

You can also insert literal values and functions are columns in Create Table.

Figure: Create Table replaces all columns in your dataset with only the ones you want

NOTE: This feature is in Beta release.

New in Release 6.8 is the ability to import and export Macros. A macro is a sequence of recipe steps that you can use in other recipes. This recently released feature enables you to simplify the creation of consistent steps across your recipes.

With the ability to import and export macros, you can maintain this consistency across all of your Trifacta deployments, create backups and an audit trail for your macros, and build up a repository of commonly used macros, extending the flexibility of Wrangle , the proprietary transformation language of the Trifacta platform.

Webhooks are a standard messaging method between web applications using HTTP REST protocols. Through the Trifacta application, you can now design messages to be delivered to external applications on the success or failure of your jobs. For example, you can design a Webhook message to post to a Slack channel when a scheduled job succeeds. 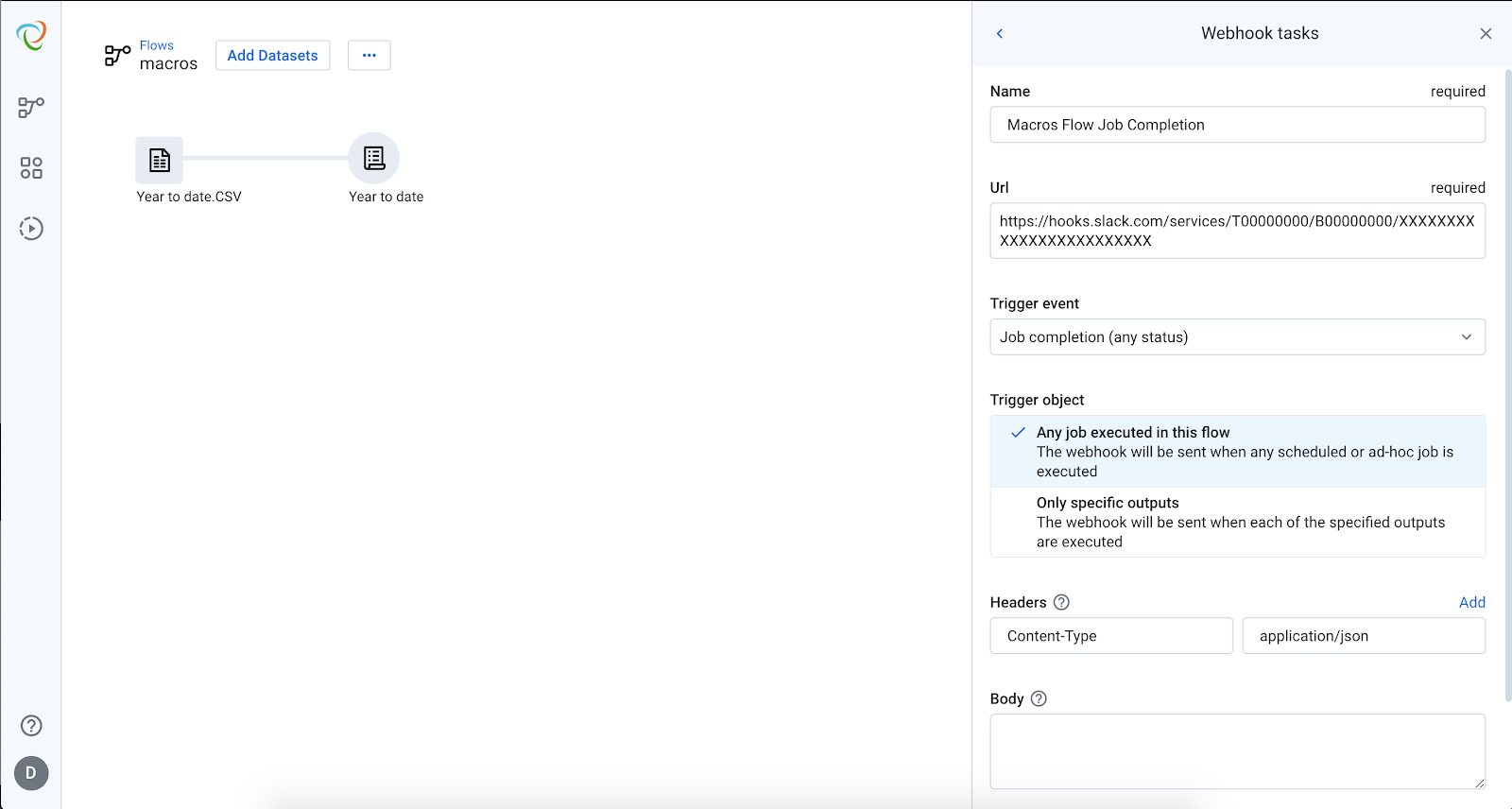 Figure: Configure a webhook message to a Slack channel

In the above, a message has been crafted to be delivered to a Slack channel that has been configured to receive the Webhook message. In this example, whenever a job is executed from this flow, the contents of the Body textbox appears as a message in the designated Slack channel.

Using Webhooks, you can inform stakeholders within their favorite applications that fresh data is ready for use and broaden general awareness of Trifacta Wrangler Enterprise within your organization.

These are just the highlights of this release. To see all of what’s new in Release 6.4 for Trifacta Wrangler Enterprise, please see Release Notes 6.8.

For more information on previous releases, see Past Releases.